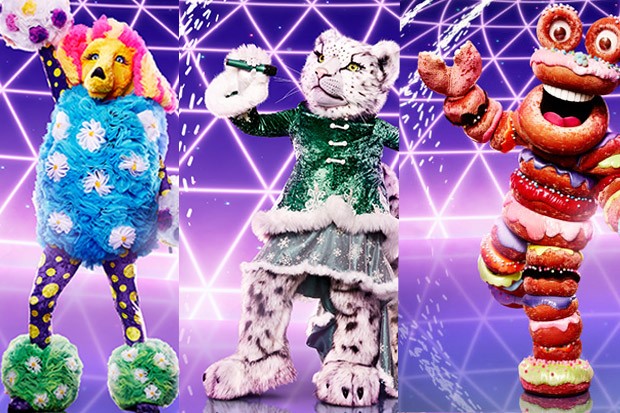 One of my favourite shows is back on tv- The Masked Singer UK! The bonkers yet hugely entertaining show has returned for its third series to bring us more performances from twelve brand new celebrities. This year the contestants/characters are Chandelier, Snow Leopard, Robobunny, Mushroom, Lionfish, Doughnuts, Rockhopper, Traffic Cone, Poodle, Panda and Bagpipes. By Saturday and Sunday all contestants had performed, so now we can discuss who we think the characters really are?
Lets start with the two celebrities who went out first. Spoiler Alert: If you haven't watched both episodes 1 and 2 then stop reading now. The most recent contestant that lost their place in the competition on Sunday was Snow Leopard who turned out to be broadcaster and presenter Gloria Hunniford. My sister guessed this one pretty quickly as in the VT she mentioned Hollywood stars from years ago who she'd interviewed including Audrey Hepburn, so whoever Snow Leopard was had to be quite old to have interviewed her all those years ago. I was quite impressed however when I found out it was her because she actually could sing and it turns out that as a child she did sing, so that makes sense now. 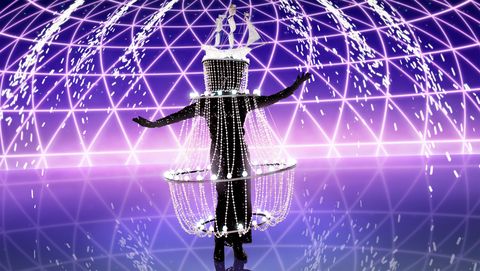 The first contestant who went out on Saturday was Chandelier who turned out to be the 90s legend Heather Small from the band M People. The problem with this performance however was that for some reason she disguised her iconic voice from the judges and audiences which confused us all. The voice that she put on made her sound a lot older than she was, so I was thinking of a singer from the 1960s or 70s. I was so shocked when she lifted up the mask however I'm glad that Mo guessed her right as it shows that he's a true Heather Small fan!
Now lets move onto the contestants who are still in the competition. Poodle has to be in my top three characters because well he's a poodle who's colourful, wears flowers, has a skin tight outfit underneath and he can sing! To guess everyone I do two things: I look at their outfit for any clues and of course I listen to their voice. If you look at Poodle's outfit he has a skinny almost catsuit like outfit with yellow spots on a purple background, has ruffles around his wrists, ankles and his body and the biggest clue to me of all is that on his ruffles he's wearing flowers. Which celebrity has flowers in his name? Brandon Flowers from The Killers!! Also based on his voice alone, the Poodle is American, has a slight southern twan to him and he has a great range, but especially he can sing a high note well! This fits Brandon as he's from Las Vegas and he's a rock singer, so of course he can sing very well. Also notice how tall he is...very tall, so again I'm very excited if this definitely turns out to be him!
Doughnuts is clearly not a singer however he's very entertaining and just exudes fun from his rings (pun indeed intended!). Based on his look he's very tall and well built which to me shows that he's a sportsman. He also performed Eye of the Tiger which is famous for being a boxing song, so I think this could be Tyson Furry. If it's not him then it may also be a footballer from the 90s, like Michael Owen for example. I can't wait to watch his other performances! 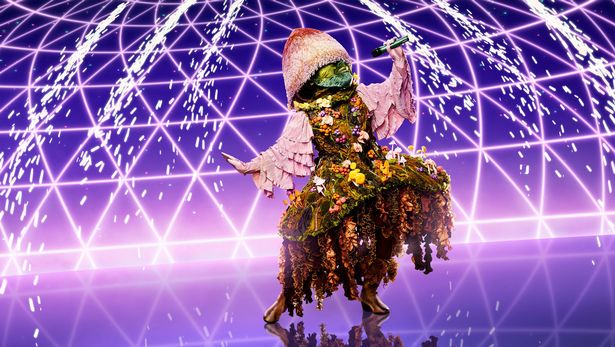 Mushroom has to be one of the most theatrical performers out of the cast. This is someone who can clearly both sing and act and I think this person has done both throughout her career. She's also very comfortable on stage which makes me feel very confident that she has performed in plays and musicals before. One person who fits all of these credentials is Jessie Buckley. Jessie is a well known Irish singer and actress and last year she played Juliet in the National Theatre's production of Rome and Juliet. This version was filmed on stage however it was seen both in cinemas and on the National Theatre at home service which is their online platform to watch their previous shows due to covid. This all connects perfectly to mushroom. 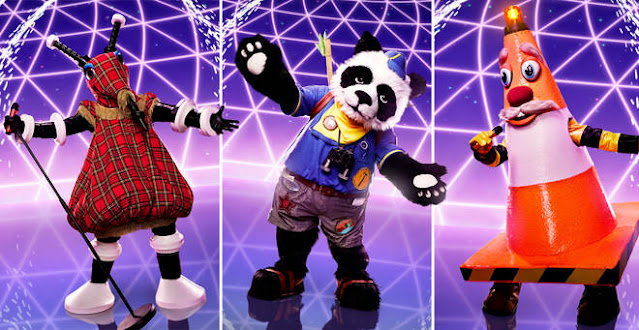 For the next three performers I'm not as confident with working out who they may be. Bagpipes sounds like a rock and roll or maybe a punk legend, so it could be Johnny Rotton from The Sex Pistols who has previously been on the American version of the show however whether he has Scottish heritage I honestly don't know? My sister thinks he sounds like Dalmon Albarn who of course actually sang Song 2, the song that Bagpipes performed as he sang it with his band Blur. Whether he would go on the show and sing his own song is the question though, however it is a very punk thing to do, so maybe he chose to do it to shock people?
Panda is the hardest one for me to guess. Physically she looks quite small in height however we can't see her frame width ways as of course pandas are round in shape, so she could be broad or dainty, we just don't know. The clothing she wears is that of a girls guide or the American equivalent seeing as she sounds American. Voice wise she can sing quite well and she seems confident being on stage however when it comes to Joel asking her questions afterwards she tends to be shy, which makes me think that maybe she's an actress who's more comfortable being in character and perhaps she was a child star? Maybe she was in a disney show however I'm sure I would recognise the voice though, so I have absolutely no idea who she can be!
Traffic Cone is very entertaining and so cute in a weird traffic cone way haha. Image wise we absolutely can't tell as no human is shaped like a traffic cone however it could mean that he's pear shaped which means that his lower half of his body is bigger than his top half. One comedian who matches that description and who's also is a big fan of Rick Astley is Michael McIntyre. With Michael's age and the sound of Traffic Cone it could very well be him and of course he could be disguising his voice too so that he gives himself a lower pitch voice, it's very interesting! 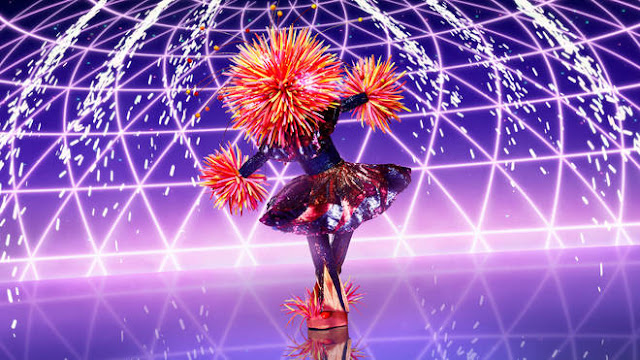 Firework has one of the best costumes out of all of them because it's fun, bright yet the celebrity can easily move around as only their head, hands and feet are completely covered. From her frame we can tell that she's tall and very slim. I don't recognise the voice at all however she gave some clues about Coronation Street. One person who's been in the soap for a while is Alison King who plays Carla. She would match the description as she used to be a model before she became an actress. Whoever she is I just love her energy! 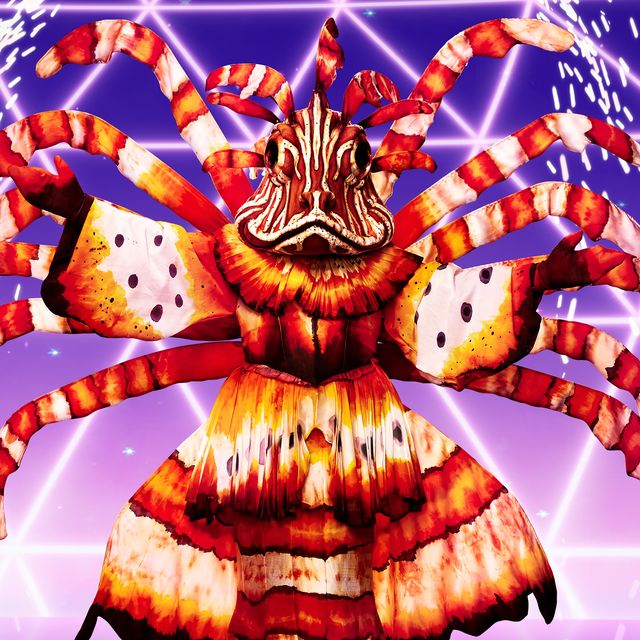 Lionfish is the flamboyant star of the show. Someone who dresses flamboyantly sometimes is Eddie Izzard. Clearly Lionfish is comfortable being in the spotlight which is why I think that this could be him as Eddie's both a comedian and actor however to give that operatic performance means that he must of had some singing lessons if not in the past then maybe even fairly recently. 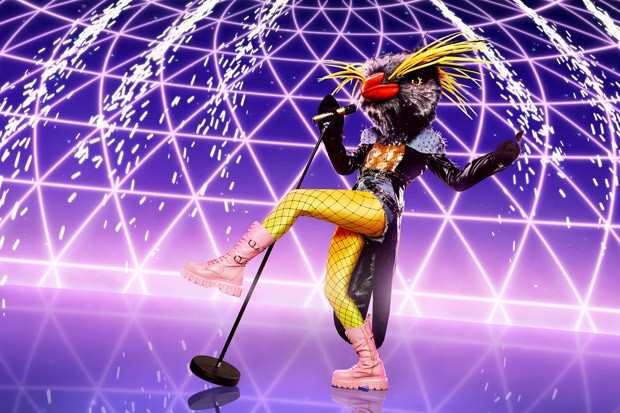 Rockhopper is another one that I have absolutely no clue about. All we can gather is that she's a tall and slim American who perhaps used to be a model just by going from the VT. She's a great performer however whether she's ever sang professionally I don't actually know? I can't wait to see what else she comes up with. 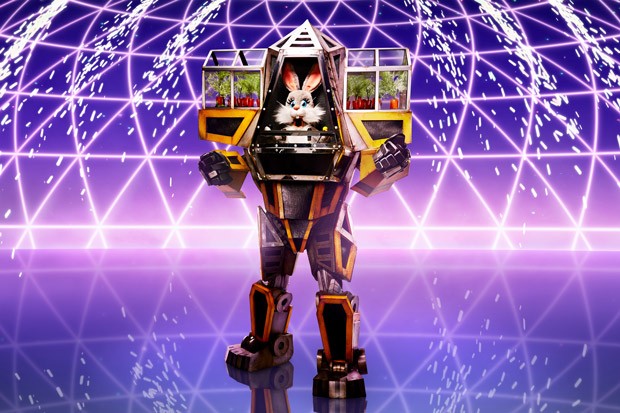 Robobunny has to be technically one of the most talented characters out of the whole group. The fact that he can change so quickly from a low pitch to a high pitch shows us that he's a really talented guy which proves that he must be a real singer. My sister thinks it's Mark from Westlife as he has this skill. Also Robobunny is quite tall and broad which is how Mark is built. I'm very excited to see what he performs next and I can definitely see him being in the final.
Have you been watching The Masked Singer UK? Let me know your thoughts and what your guesses are.
Thanks for reading
Chantal