THE Band To Watch! Inhaler It Won't Always Be Like This Album Review 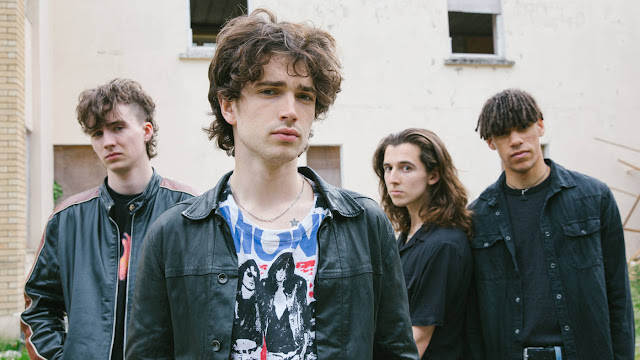 I'm back! It's been a while since I've created a post and part of that is due to a lack of inspiration because of the pandemic and part of that is to do with laziness, so sorry I just haven't felt that creative recently, however now I'm back and rearing to go!

One of the few things that has kept us going through this unusual time is music. It never fails to uplift us when we're down, or even when we're ecstatic. Recently there haven't been that many new bands or artists that I've felt connected to, I can count on my hand how many. One band that has caught my eyes and ears has been Inhaler, the Irish Indie Rock band from Dublin who are a four piece that includes Elijah Hewson (vocalist & guitarist), Robert Keating (bassist), Josh Jenkinson (guitarist) and Ryan McMahon (drummer). If you know your music and Pop culture then you'll know that Elijah, known as Eli is actually the son of Bono. What I love though is that neither of the band or Eli himself have used Bono's power and connections to make their band the success it is, they've worked on it themselves taking the time needed to perfect their craft to make it the best debut album that it can be and I'm very happy to say that it is just that!

It Won't Only Be Like This features songs from when they first ever started writing together in their early teens and the title track of the album which is also the first track listed on the album encapsulates this perfectly. Now this song has taken on a different meaning due to the pandemic however it still shares the same message as before which is to appreciate what you have now as you don't know how long you'll have it for and to tell you the truth this is exactly how I live my life, so I can totally relate! Phonically it's a brilliant up tempo track that instantly gives you loads of energy so you feel that you can take take on whatever the day throws at you.

My Honest Face is a track that the band released a couple of years ago before I actually knew of them however I'm pretty sure I remember hearing the song on the radio at the time, I just had no idea it was them! It's full of high energy and the drums on this track sound amazing, it really packs a punch!

Slide Out The Window is a mid tempo song that talks about wanting to be somewhere else when you're stuck in a place you can't get out of, which of course is very relatable to what we all went through this year and last year. It was one of the last songs they created for the album and I think that you can actually tell as it sounds the most sophisticated and stylish out of all the tracks, so you can tell they wrote this one recently while in their twenties.

Cheer Up Baby is high up there on my favourites for the album. It wasn't written recently however again due to our lives recently it has taken on another meaning like the first track as it was made into a love letter to their fans during the pandemic in a way to tell them that they are not going through it alone. The guitars and drums sound impeccable on this song, I love it so much!

A Night On The Floor is very reminiscent of youth culture. It has a more grown up sound to it, both metaphorically and phonetically, so I'm guessing this one was also written recently. It has a much slower pace than the rest of the tracks and a great guitar solo towards the end!

My King Will Be Kind is about someone who doesn't give enough to a relationship, which means that you're the only one who's putting in the effort. This song has a very chilled vibe about it which I like a lot.

When It Breaks for some reason reminds me of all the songs that you would have in The Inbetweeners, it's just a great noughties sounding Indie song! It's upbeat, energetic and fun, what more could you want?

Who's Your Money On (Plastic House) is arranged as two songs played one straight after the other even though it's one song, if that makes sense. The Who's Your Money On? part of the song has more of an electronic sound to it in the beginning which I love and mixed in with the drums and the guitars makes it sound amazing! The Plastic House part of the song has a beautiful melancholy sound and feel to it, which really brings the emotive lyrics to the forefront of the track.

Totally is such a great song! It's about a couple who's completely incompatible but yet for some reason they're still together. It's mid tempo sound makes it great for chilling out to. I love how Eli annunciates the words in this song, I don't know what it is but he makes every word sound enticing.

Strange Time To Be Alive is pretty self explanatory as it really is a strange time to be alive! It's more of an intro as it's so short however that also encapsulates the meaning of it as well.

In My Sleep is about dreaming however it feels so real to you that you can't explain it. The guitar sounds powerful throughout the song as well as Eli's vocals, like the rest of the album it's a strong performance.

This album has only been out a couple of weeks however it's definitely up there as one of my favourites of the year so far. Eli's vocals are amazing and he has such a beautiful velvety voice and Robert, Josh & Ryan make for brilliant musicians and they will only improve the more mature they get. It's a strong debut album full of personality, Irish charm and grit. I can't wait to see them perform these songs live live in October (it better happen!). I truly believe they are going onto great things and I can't wait to follow their journey!

Have you heard Inhaler's debut album? If you have what do you think of it?