Some songs I've been loving recently 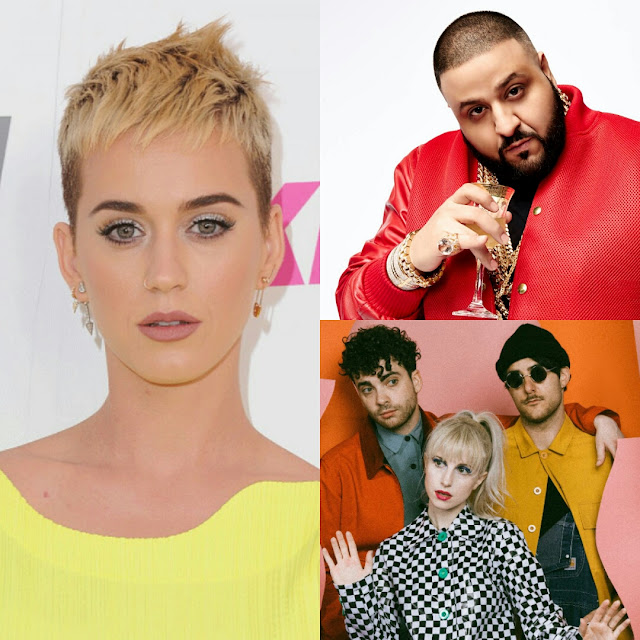 I haven't written a music blog post in ages, so I thought that it was about time that I'd update you on some of the songs that I have been loving at the moment. There haven't been that many songs over the last few months that I've been that bothered about however very recently 3 songs have had me clicking the play button more than once recently, which in my book means that they are going to be huge hits with people (if they haven't charted yet). These songs are all from huge artists including Katy Perry, DJ Khaled & there's a comeback from Paramore which is very exciting, especially if you were a huge fan of them back in the day.

Let's start with Katy Perry's Swish, Swish. I feel like Katy Perry has gone in a new direction with this album as it sounds a lot more like a dance album rather than a pop album and so far I'm loving the results of this experiment! I like her other songs she's released so far (Chained To The Rhythm & Bon Appetit) however I like this song the best as it's sure electronic/dance music and I think we need this kind of upbeat music right now the most what with everything that's been going on lately and if it's one thing music can do it's that it can provide some escapism from the horrible things that go on in the world and this track will sure make you feel great!

Now DJ Khaled is an artist that I'd heard of but I don't think I've ever listened to one of his songs before, but when I'm The One came on one of the Spotify playlists I was instantly hooked. It has Justin Bieber on vocals which makes the song even better in my opinion as I feel his voice nowadays suits that R&B sound to it and it would be a great song to listen to when you are getting ready to go on a night out as it's mid tempo so you can bop along to it (lol bop does anyone ever say that word, probs not but I still like it ha). It's a tune!

Paramore was not a band that I was obsessed with as a child/teenager however even I love their new comeback song Hard Times and even the video is really great. The band is singing in this really colourful and almost neon room and there are cool effects in it too, the look of the video is very late 80s/early 90s and that makes me very happy. I'm pretty sure this song has already been a huge hit and if not it will be for sure. It's a song that really puts you in a great mood which contradicts to the title of the song actually, but I really do think that it's a perfect comeback song for them-it's a different style for them as it's very Pop in style but I feel this will bring in a new audience for them which is what every artist wants when they release new music.


I really hope you liked this post. Let me know which songs from this post you love the most and also I'd love to know what songs you've been loving recently too.