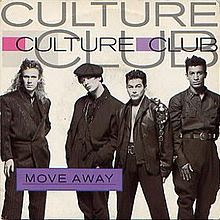 I feel like I haven't done a That's A Tune post in aaaaages, but today I'm back with another one and we are now on number 40 which is a bit crazy, but I still like posting about them so I'm not going to stop haha. Today's post is about another Culture Club song. I've been listening to a lot of 80s music and whenever I do that I seem to go on a Culture Club listening splurge. Their songs are just so great and George's voice is stunning! About six or so months ago I discovered a song by them that I never heard before called Move Away which I then found out was from their 4th album but I never listened to that one before. Personally I'm not keen on the other songs on the album but this one is amazing! It's catchy, it's got great lyrics and it just sounds very stereotypical late 80s which I love! It's just a song that makes you feel really happy and ready to go, it's probably a good song to put on first thing in the morning to wake you up too haha.

Take a listen and see what you think

I hope you liked this post. I'll see you with another one soon.