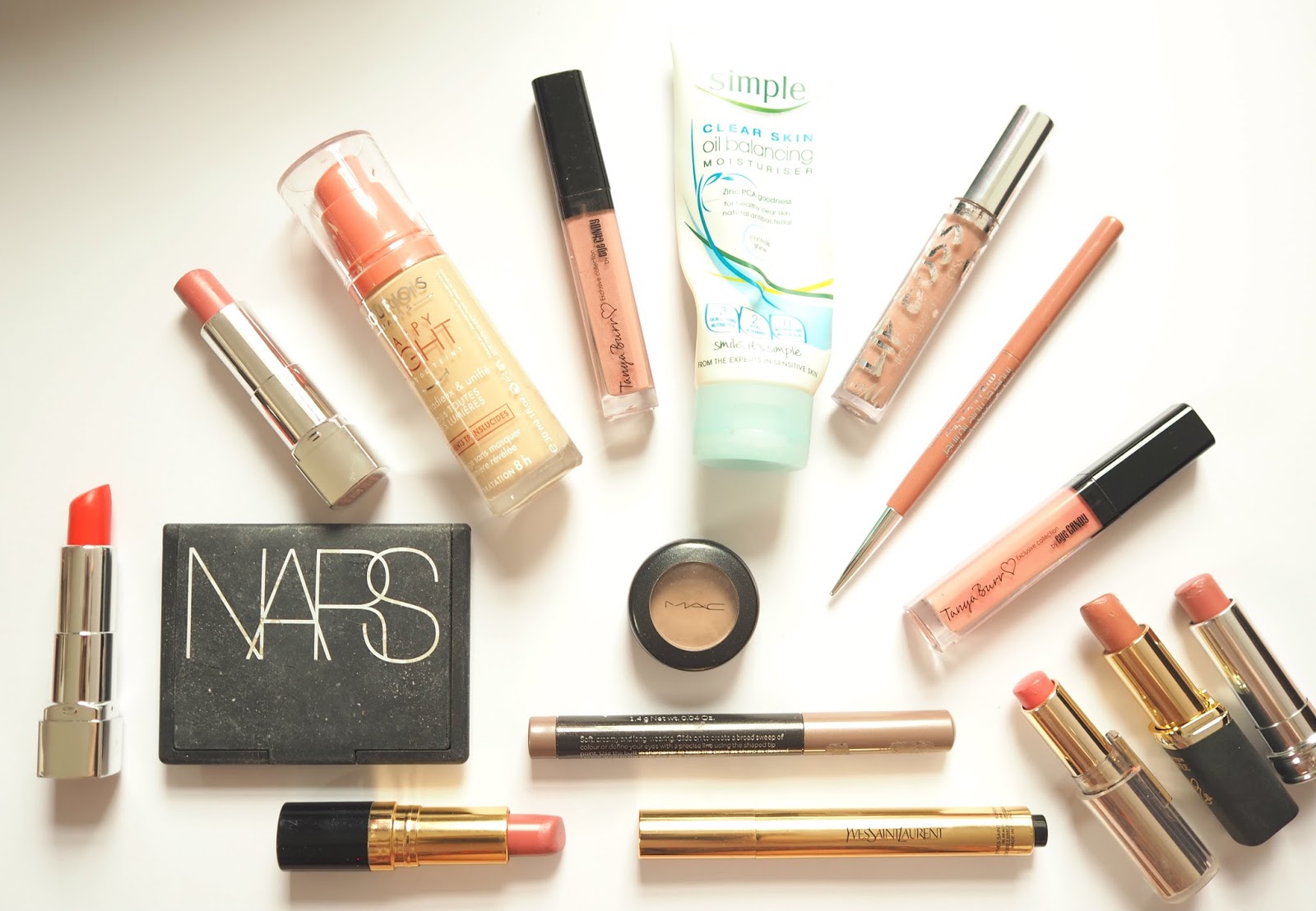 I've only recently noticed that because I've been buying quite a few new beauty products recently that I have kind of neglected the older products I used to love using. This sudden thought prompted me to go through my makeup collection and pick out the old products that I should really start using again. Some of these products have been discontinued now, however most of them you can still purchase very easily either in store or online.

First let's start off with what used to be my favourite foundation before I discovered the L'Oreal Infallible 24HR Matte foundation. This was the Bourjois Happy Light Foundation and I used this non-stop for a good year or maybe even year and a half however I noticed that when it came to the hotter weather it wouldn't last as long as it did in winter, so I stopped using it. So my plan for this is to start using it again the end of August/early September to see if I will get on with it better then. As the name suggests it's a light foundation that leaves you with a glowy finish (mind you I always powder all of my foundations so it looks more matte on me) and it has buildable coverage which is great. The only thing I would say is that because it's a Bourjois foundation the shade range is poor but I still think Bourjois make some of the best foundations out there and this one is one of them.

Next is the Tanya Burr Cosmetics lip gloss in Aurora, which sadly has discontinued so I won't go into too much detail about this product, but it was a really lovely slightly cool pink shade that had a bit of a purple tone to it and it had a great colour pay off but as it's not part of Tanya's new revamped line of makeup I will no longer be able to purchase it which is a shame because it's so good!

Then there's the Simple Clear Skin Oil Balancing Moisturiser which I still love and the only reason why I haven't been using it is because I've been using my Lancome Skin Corrector instead which kind of acts like a moisturiser and skincare in one, but I must try using this after I put that on to see whether it makes a difference to my skin's condition.

After that we have the Barry M Lip Boss in the shade 5 which is a brown/beige nude colour. I used to love their old range of lip glosses and one of them had a shade just like this so once that range got discontinued I bought one from their new range but I just haven't been wearing it enough recently which is why I need to start wearing it again as it's such a great lip gloss. It's pigmented and very moisturising too plus it's a great everyday shade to have in your collection.

L'Oreal's Infallible range has a whole host of different products and my next pick is a lip liner from the range. It's the shade Always Toasted which is a slightly dark rose pink shade so I find it really does make your lips look a lot plumper than they actually are once worn all over the lips. The problem with this lip liner though is that it breaks really easily so you have to be careful with how you use it, so you can't press on the pencil too much otherwise you will just keep ruining it like I did, but apart from that I like it very much so i should use it more really.

There's also another Tanya Burr Cosmetics lip gloss in the colour Picnic In The Park which is a shade that's still available to buy and this is a brighter day time pink that's more warmer in tone than Aurora was. It's such a lovely colour, especially for the summer months.

Then we have three lipsticks: Lancome Rouge In Love shade 240M, L'Oreal Paris Color Riche lipstick in Eva's Nude and the L'Oreal Rouge Caresse lipstick in the shade Dating Coral. Two of these lipsticks have discontinued now however you can still get hold of Eva's Nude which is a salmon pinky nude shade. The Lancome lipsticks are still around however in recent years they changed the shades around, so for example 240M is now not exactly the same shade as it was before and all the Rouge Caresse lipsticks have gone which I'm so disappointed by as they used to be my favourite lipsticks, so I've been holding this one on for a long time now.

YSL's Touche Elat is such an iconic beauty product that most people have tried it at least once and for good reason as it's a great highlighter. I got mine two years ago for Christmas and I still haven't used it up so I've gone back to it. I'm not sure I would ever buy it again as nowadays you can get lots of highlighting/concealer pens in the drugstore now so I would rather save my money to get something else instead and just pay for a cheaper alternative, but I do think it's still a great product though.

No7's Stay Perfect Shade and Define eyeshadow stick is something that I bought on a whim about a year or so ago now and it's an ok product, I just don't reach for it often as it's not my favourite colour ever as it's a taupey silver shade and the formula is not the most comfortable on the eyelids however that does mean that it stays true to it's name as it really does stay on all day.

Revlon Super Lustrous Lipstick in Pink In The Afternoon is such a lovely bright but not too bright everyday pink shade that I used to wear a lot until I discovered other lipsticks that I thought had a better formula. I stopped wearing it as the lasting power wasn't that great, but I'm willing to give it a go again.

I have two Rimmel Lipsticks, one which is the Moisture Renew Lipstick in the shade In Love With Ginger which is a gorgeous and very vibrant orange red shade and the only reason why I don't wear this often is because like with the Revlon lipstick it doesn't last that long, but it would be great if you are going out for drinks and you only needed something that will last for a few hours but it will still look great. The other shade is a light pink called Let's Get Naked- a funny name for quite a normal lipstick shade but I do still like this one though.

Lastly I have Nars Laguna Bronzer and Mac's Wedge eyeshadow. Laguna has to be one of the best bronzer's out there as it's not too orange or red in tone and Wedge is the perfect crease colour, although on me it doesn't look like a strong matte brown, but if you have fairer skin it will suit you well.

Close up shots of the Laguna Bronzer and the Stay Perfect eyeshadow pencil so you can see exactly what the shades of them look like. 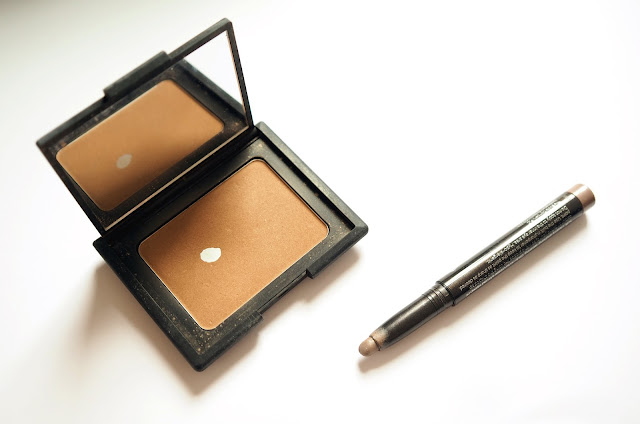 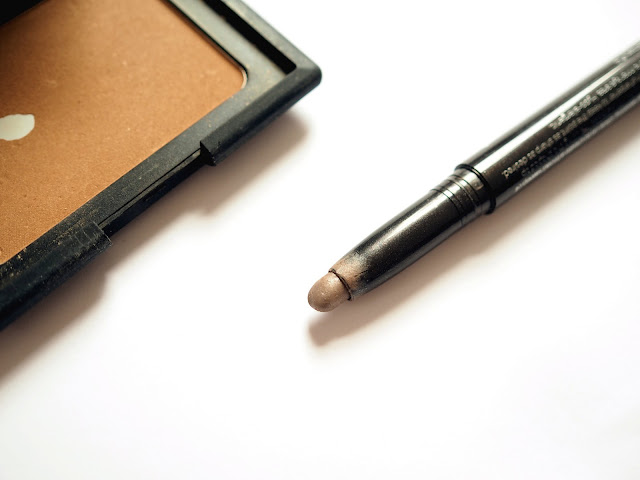 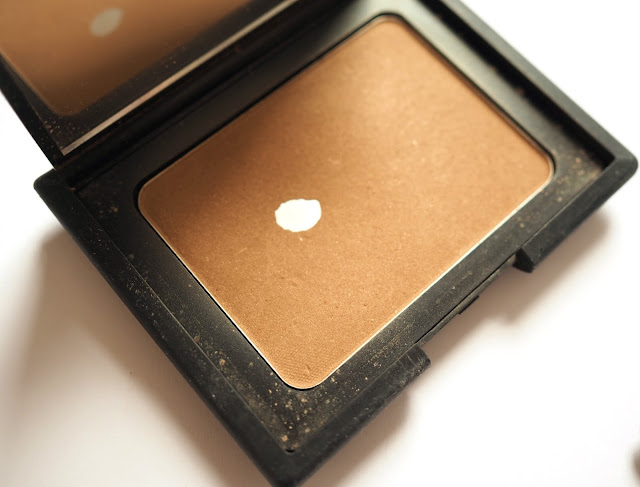 I hope you enjoyed that post. Let me know what your forgotten beauty products are and whether you'll be bringing them back out again soon for a spin.